Are Copic Markers Really That Expensive? 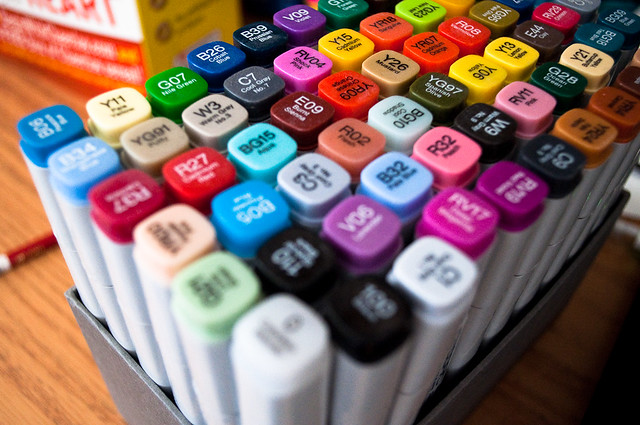 Whether you are a newcomer, a fan, or a professional, if you’re into coloring, then you’ve heard of Copic markers.

You’ve probably witnessed the infamous markers take the art world by storm and just couldn’t wait to get your hands on them. So you set off to buy some only to come face to face with a tiny setback; that price tag.

Copic markers have a pretty solid reputation of their impressive performance, but they are also known for being rather expensive which, naturally, makes you wonder why. What is it that deems these markers so special? Well, get ready to get some answers with our list of reasons why Copic markers rank high on the price scale.

Reasons Why Copic Markers Are Expensive

First thing’s first, we need to set the record straight. You need to recognize that Copic markers aren't your average coloring marker, they’re so much more.

Copic markers deliver premium quality results fit to a professional standard. They’re widely used by pro artists, colorists, designers, and even architects in various ways, from comic sketching all the way to drawing on clothes and buildings designing.

Copic markers are illustration-grade markers as opposed to school-grade ones, and just like any other domain, tools that are meant for professionals will cost more than ones for beginners because, as expected, better quality equals more money.

Forget the amateur times, you’re in the big leagues now.

For most artists, when the words alcohol-based markers come up, Copic markers immediately follows. That's because they're famous for having alcohol as a base instead of the common water base. This means that the ink inside the marker is suspended in alcohol rather than water.

Basically, alcohol is what makes Copic markers permanent. The ink will remain as vibrant and intact as initially applied. Alcohol also allows you to use the markers on all sorts of surfaces other than paper. Be it plastic, metal or even fabrics, Copic markers can indeed have their way around them.

Being alcohol-based also results in the beautiful smooth application of their ink, which makes it easier for you to glide the marker over the paper without worrying about it choking and ending up with a fragmented streak. Add in the fact that it dries acid-free, and you won't have your paper fibers damaged the way water-based markers usually do.

To top it off, Copic markers are carefully handmade and the chemicals used in their manufacture are odorless and non-toxic, which makes for a much more enjoyable irritation-free experience.

3. Copic Markers Have a Huge Array of Colors

Just can't seem to get enough of collecting all those colors of markers? well, who can really blame you? Having lots of color options is essential for any artist out there and sometimes you can't help but expand your stock.

There’s no shame about that, and the folks at Copic get it. Offering an insane number of 358 different colors, and counting. The huge array of shades, which some consider colors heaven, guarantees you finding that one color you've been searching for but thought it didn't exist yet.

Copic markers aren't only limited to one type. On the contrary, they come in a selection of four options of markers, each one is double-sided, to cater to each and every purpose you'd need them for.

First up is the Copic Classic, the first original version to be produced. Known for its simple straight to the point approach, it's exactly what you want to use for bold strokes and speedy filling.

Next in line is the Copic Sketch, the most popular edition of the markers among professional illustrators, artists, and designers. This version has the widest range of colors along with the highest flexibility and fine-detailing ability.

Followed by the Copic Ciao, the more regular-styled type of markers. It's an economical choice with a basic style of stroke, simply perfect for first-timers. The only thing missing here is the color code which isn't displayed on the marker.

Last but not least, Copic Wide. It's exactly what the name suggests, a marker that’s ideal if you want quick broad coverage of large areas with a minimum number of swipes.

5. Blending is a Bliss With Copic Markers

Ask any colorist and they'll tell you, blending is absolutely fundamental to nail that flawless gradient. That's exactly what you get when you decide to own Copic markers.

The blending journey begins at even one marker only where the layering method comes in handy. However, using two markers or more, that's when the real magic happens. Due to their alcoholic base, Copic markers offer a smooth and effortless blending job. You can also go in again with your marker anytime after the ink dries for further retouching because the open time on paper is just that long. This enables you to easily highlight, shadow, and create depth, dimensions, and all around amazing art.

In addition, to make the blending process simpler and help you achieve the best results, Copic markers follow a color code system that lets you pick colors that better match each other. This code consists of a letter, sometimes two, referring to the color family, and followed by two numbers. The first number indicates the degree of saturation while the second corresponds to how light or dark that particular shade is.

Be sure to get familiar with the color system to take full advantage of your markers potential.

Check out our guide on how to blend Copic Markers!

How to blend Copic Markers

One thing that many users often overlook is the fact that Copic markers are reusable. Which means that when you use up your marker, you can actually fill it up once more with ink. The seemingly infinite number of refills translates into you saving money.

Instead of buying a new marker every time a color runs out, a scenario that leaves you with stacks of useless markers and a broken budget, you can just refill the marker you already have with ink, which is a much cheaper alternative if you look at the bigger picture.

Ink is available in 25 milliliters bottles that come in all 358 colors. The number of refills out of a single bottle depends on the type of marker you got on your hands. One bottle of ink grants the Copic Classic 9 full refills, the Copic Sketch gets 12 refills, while the Copic Ciao can be refilled 15 times and the Copic Wide is refilled 7 times. This is because each marker has its own capacity.

You can also customize your personal color by mixing different ink colors and loading them into colorless Copic markers, yes those exist, if you want to freely experiment without staining a perfectly fine marker.

The Super Brush nibs on the Copic markers are pretty well known for their smooth paint-like application. But the really cool feature that Copic markers offer is giving you the ability to replace their nibs. Dealing with markers, you've probably faced the frustration of having the nibs worn out or damaged while the marker itself was totally fine. No doubt this made you wish you could just take it off and put a brand new one instead of buying another marker and letting the old one go to waste. Then, you're in luck because Copic markers grant this specific wish to all the artists using them.

Reasons for replacing marker nibs aren't limited only to them being shabby, a mishap that Copic markers aren't really prone to owing to their high quality. You'll find this option most valuable when you want a different style of a streak. You can choose different nibs to get thinner or thicker strokes or to apply color in a lighter or heavier pressure.

Although you can replace the nibs on the four versions of Copic markers, they don't equally support all types of nibs. The Copic Classic has the most options with 9 different nib styles followed by the Copic Sketch having 3 nib options. The Copic Ciao and Wide both offer only 2 different types of nibs.

The procedure of replacement is pretty quick and foolproof, all you need is a nice flat tweezer and you're good to go. Once you insert the new nib, the ink will spontaneously flow through it leaving your marker ready to roll.

Finally, the thing we all hope for, want and need, is for our markers to keep their integrity as long as possible. When it comes to Copic markers, they guarantee a shelf life of 3 years which means that after you use them, the ink will not dry out while they're kept away. So no worries, you can stock up as they will last for a seriously long time. With the right maintenance, some artists have been able to use their markers for over 20 years.

As for color consistency, you can rest assured that you'll be satisfied with the quality delivered each time you use the Copic markers because they're hand-tested 3 times before being shipped for their homeland, Japan.

The Verdict: Are Copic Markers Worth It?

Are Copic Markers expensive? Yes, but the real question is, are they worth it?

The idea that once you own a Copic marker it's yours forever, is a definite winner. Coupled with the refilling feature and the multi-styled replaceable nibs, it's safe to say that Copic markers are not that costly on the long run and they make a great investment.

Lena is an artist, she enjoys arts, cooking, scrolling through social media, writing and spending time with her 2 boys - not necessarily in that order. While not busy on her art and writing - she can be found in the kitchen trying out new recipes.

How to Blend Copic Markers?